In a clip broadcast on WCIU morning talk show, You and Me In the Morning, the hosts, Jeanne Sparrow and Melissa Forman, get shown everything about Surfset Fitness at The Chuan Spa & Health Club by Unicus Fitness Trainers Sandi Berger, Mike Perrozzi and Chris Fuller.

Surfset Fitness utilizes Surfset Surfboards to create a series of surf inspired exercises that help the body get into shape through the use of the unstable surface. 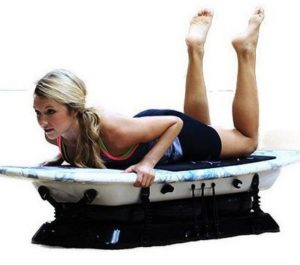 The Chuan and Unicus Fitness brought Surfset Fitness to downtown Chicago over the summer by having classes outdoors on the AMA Plaza. Coming up in the winter, there will be more of these classes inside the Chuan that will be available to both members and non-members who want to have fun while getting into great shape. The surfing exercises, combined with Unicus Fitness methodology, produce a potent workout system that targets the core, butt, legs and balance.

The Surfset training device and protocols were developed by a former professional hockey player that discovered how great a shape he was in from an off-season of just getting out and surfing the waves. After an injury derailed his pro hockey career, he was able to create the first Surfset training devices and get his invention on the popular TV show, Shark Tank. His device was a hit and it got sent to market and the rest is history!

Get the latest from the best fitness team in Chicago.